“Dear reader, the Loewe show has been canceled, but our lives continue. We’re just living in a different context and we have to move on, whatever happens,” read the newspaper announcing in bold letters that “The Loewe Show has Been Canceled.” Jonathan Anderson presented Loewe’s Fall 2021 collection in the format of a newspaper, ready to be enjoyed with a morning cup of coffee, an act that is equal parts familiar and energizing. The collection pictured was full of life and imagined a more hopeful future of bright, joyful colors and avant-garde shapes. The sentiment that we must forge a path into the future, despite the uncertainty surrounding us, was echoed throughout Anderson’s collection and many more over the past week in Paris.

As designers look to the future, they either take steps to prepare for it or see it as a means of escaping our current reality. Chanel, Miu Miu, and Akris took on winter utility this season. Infused with “ski spirit,” Chanel’s show consisted of cold-weather necessities from quilted salopettes to Norwegian sweaters. Captured in the Italian Dolomite mountains, Miu Miu’s collection was a love letter to the great outdoors. It featured a modern update to the puffer jacket and oversized ski suits, fur boots, and crochet accessories. “I walk a lot in the mountains and when it’s bad weather, it’s difficult,” said Miuccia Prada of her inspiration. “Little by little, I realized what I was trying to say: Bravery. The dream to do something that’s important and difficult. The clothes are not romantic but the spirit is.” The collection showed a future of dressing for protection from the elements while preserving a sense of both comfort and romance. Akris presented a ski-centric lookbook shot at the Abbey Library of St. Gallen, a UNESCO World Heritage site. Map prints and geometric tile motifs evoked feelings of escape, while wool overcoats and beanies highlighted the importance of functionality.

Focused on the journey rather than the destination, Balmain’s Olivier Rousteing shot his most recent collection in a hangar at the Charles de Gaulle Airport under a retired Air France 777. Models sported aviation-inspired utility wear, including rip-cord dresses and bomber jackets, as the backdrop shifted from the hangar in Paris to a digitally rendered runway platform suspended between Earth and moon. Our journey to space was driven by excitement for the future, as Rousteing described his mindset: “of loving my present, but also being so excited about a better future.” This sci-fi adventure represents a larger theme of escapism that emerged in several notable shows. In a collection titled As the Way It Comes to Be, Issey Miyake suspended reality and explored otherworldly and futuristic forms. The collection integrated a series of fabric treatments and construction techniques, including Stone and Monochrome Planet. The Stone series was created with patterns inspired by stones that are made by craftspeople in Kyoto using a traditional technique called suminagashi, while Monochrome Planet is a hand-pleated series of garments with concentric pleats and cutouts. Each garment can fold along the pleated lines, transforming from a flat piece into a curved, three-dimensional form.

Driven by fantasy of a different sort, Dior’s Maria Grazia Chiuri found inspiration in the world of fairytales. Shot in the Hall of Mirrors at Versailles, the show reached 115 million views and transported the audience into a world unlike any other. “I prefer the original fairy tales. The references are scary. It’s a way to teach young people what happens in the world,” said Chiuri. “A way to prepare them for the future.” The collection found an unlikely balance between darkness and dreaming, reflecting the wary optimism designers in Paris are bringing into the coming season. 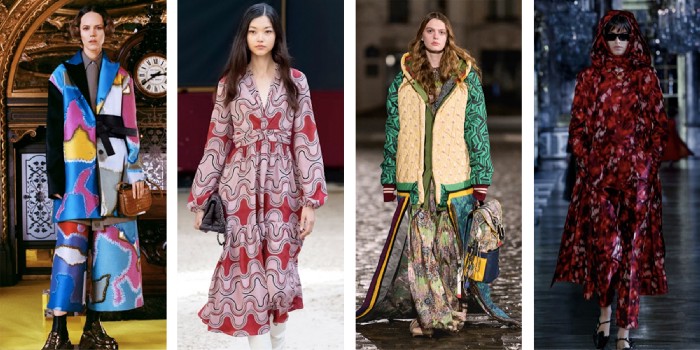 Curved lines, bright colors, and idyllic, contrasting shapes were present across Paris’ runways. From irregular shapes at Loewe to curved lines at Longchamp, designers were excited to experiment with abstract prints this season. Chloe and Dior also took part in this love affair with abstraction as they relied on bright prints to bring their dresses to life. 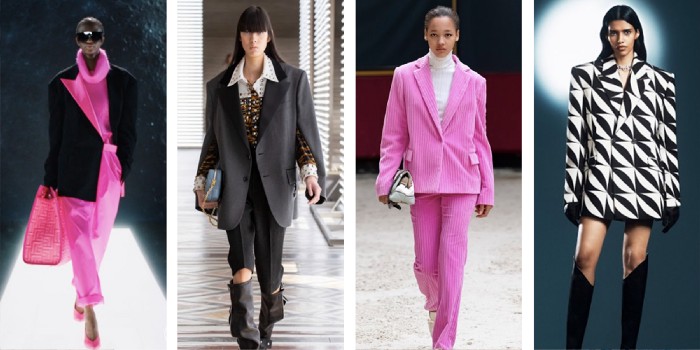 A key item this season, oversized blazers, brought sophistication and larger-than-life silhouettes to fall-friendly attire. At Balmain, a black velvet blazer with pink lapels was styled with a pink monochromatic outfit. Longchamp also relied on hot pink hues for their corduroy blazer and matching flare pants. Both Louis Vuitton and David Koma took a more formal and less colorful approach to the style with an oversized, cape-inspired blazer at Louis Vuitton to a black and white, geometric-patterned blazer dress at David Koma. 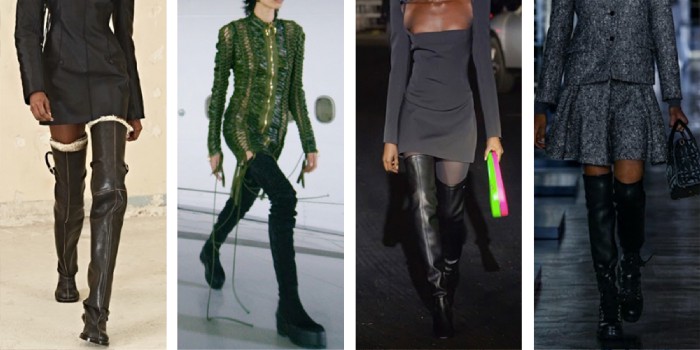 The biggest footwear trend for Fall? Over-the-knee boots were a favorite of designers at Paris Fashion Week. From shearling-lined brown leather buckle boots at Acne Studios to suede platform skin-tight boots at Balmain, over-the-knee styles vary in versatility. Both Coperni and Dior styled their black leather boots, lace-up or not, with a black midi dress or a matching skirt suit set, all effortlessly, timeless looks. 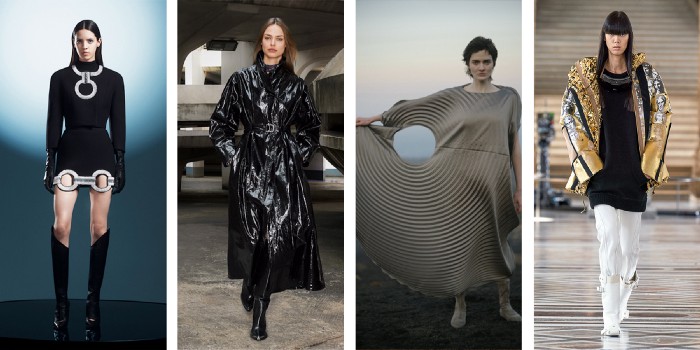 Designers suspended reality and explored otherworldly and futuristic forms in their Fall 2021 collections. Inspired by space travel, David Koma brought forth a collection of bodycon mini dresses and metallic details. The intergalactic cutouts at Koma also found their way into Issey Miyake’s textured collection. Isabel Marant reinvented the past, creating “1980s silhouettes with 2030 fabrics,” while Louis Vuitton integrated references to both the past and future throughout its show staged at the Louvre. 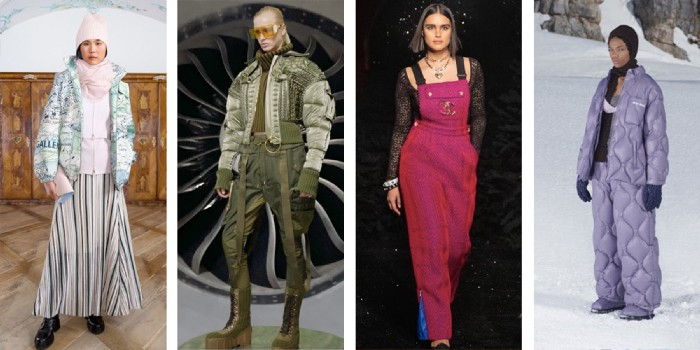 Designers in Paris prepared for our post-lockdown future with collections ready for any environment. Captured in the Italian Dolomite mountains, Miu Miu’s collection featured an array of puffer jackets, fur boots, and crochet accessories. Chanel’s show was also infused with “ski spirit” and consisted of cold-weather essentials. Focused on the journey rather than the destination, Balmain shot its collection at the Charles de Gaulle Airport, where models sported aviation-inspired utility wear like rip-cord dresses and bomber jackets.

If you’re interested in our full Fall 2021 runway coverage or want to learn more about trends that are growing — and dying, please contact [email protected]

From glam accessories to shag mullets, these are the trends that emerged…

From colorful patterns to standout accessories, these are the trends that emerged…