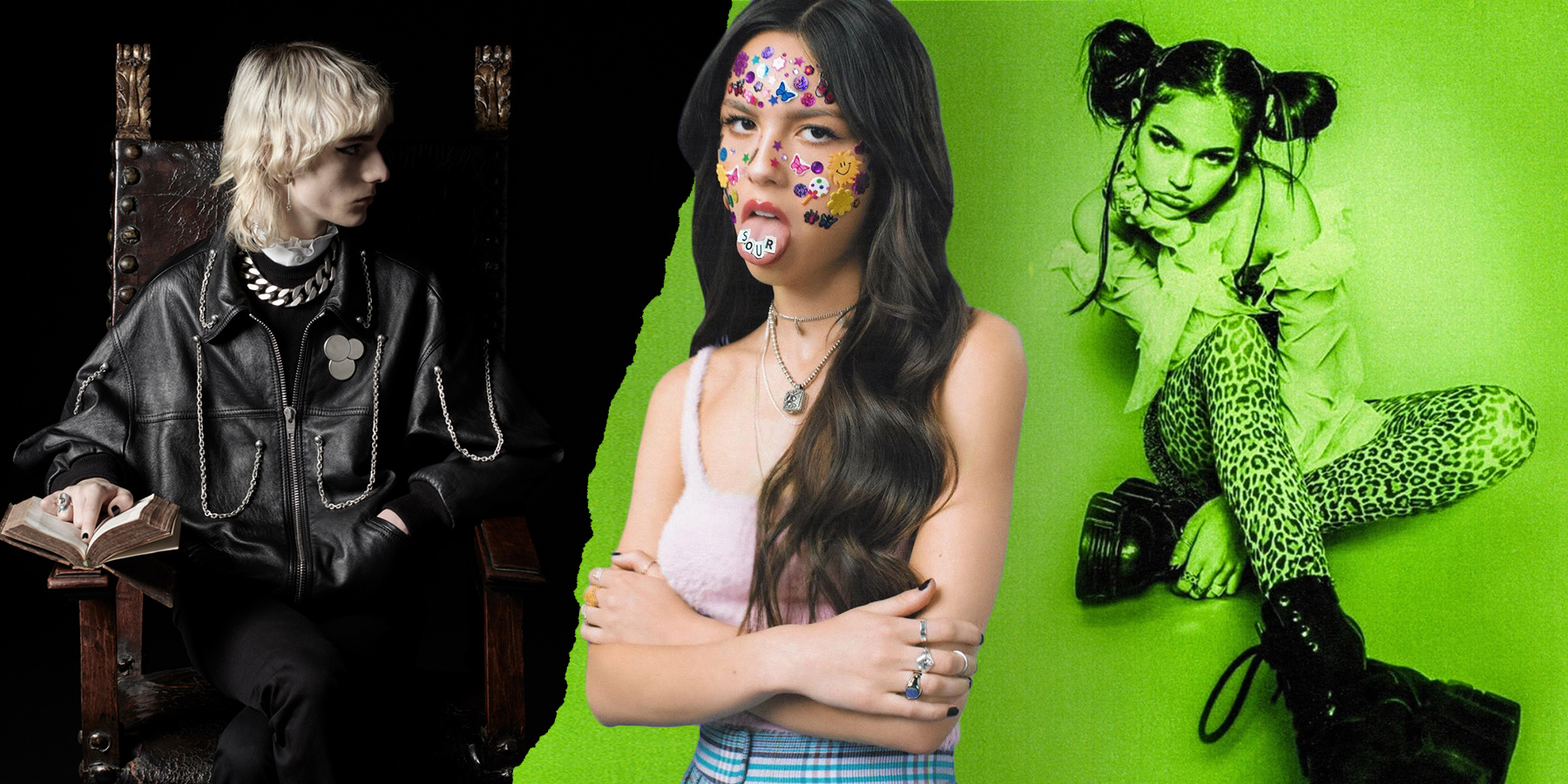 Whether it’s Olivia Rodrigo spouting high school drama in her hit album SOUR or Willow Smith calling out fake friends in her latest single, adolescent angst is back and bigger than ever. A celebration of non-conformity and anti-establishment views, punk is returning to the main stage in more ways than one as its eye-catching aesthetic masks much deeper roots. A subculture centered around music, it only makes sense that the next generation of pop punk artists leads its revival. TikTok star Chase Hudson, aka Lil Huddy, has evolved his e-boy aesthetic into a full-blown pop punk persona, recently dropping his first two singles produced by Blink-182 drummer Travis Barker. Maggie Lindemann, another Gen Z star, revealed a new look and her debut EP, Paranoia, in January. Rich with signature emo sounds and crashing choruses, the EP reflects her definition of emo: “Feeling like I can express myself how I want through my music, the way I dress, the way I do my makeup, without judgement…” 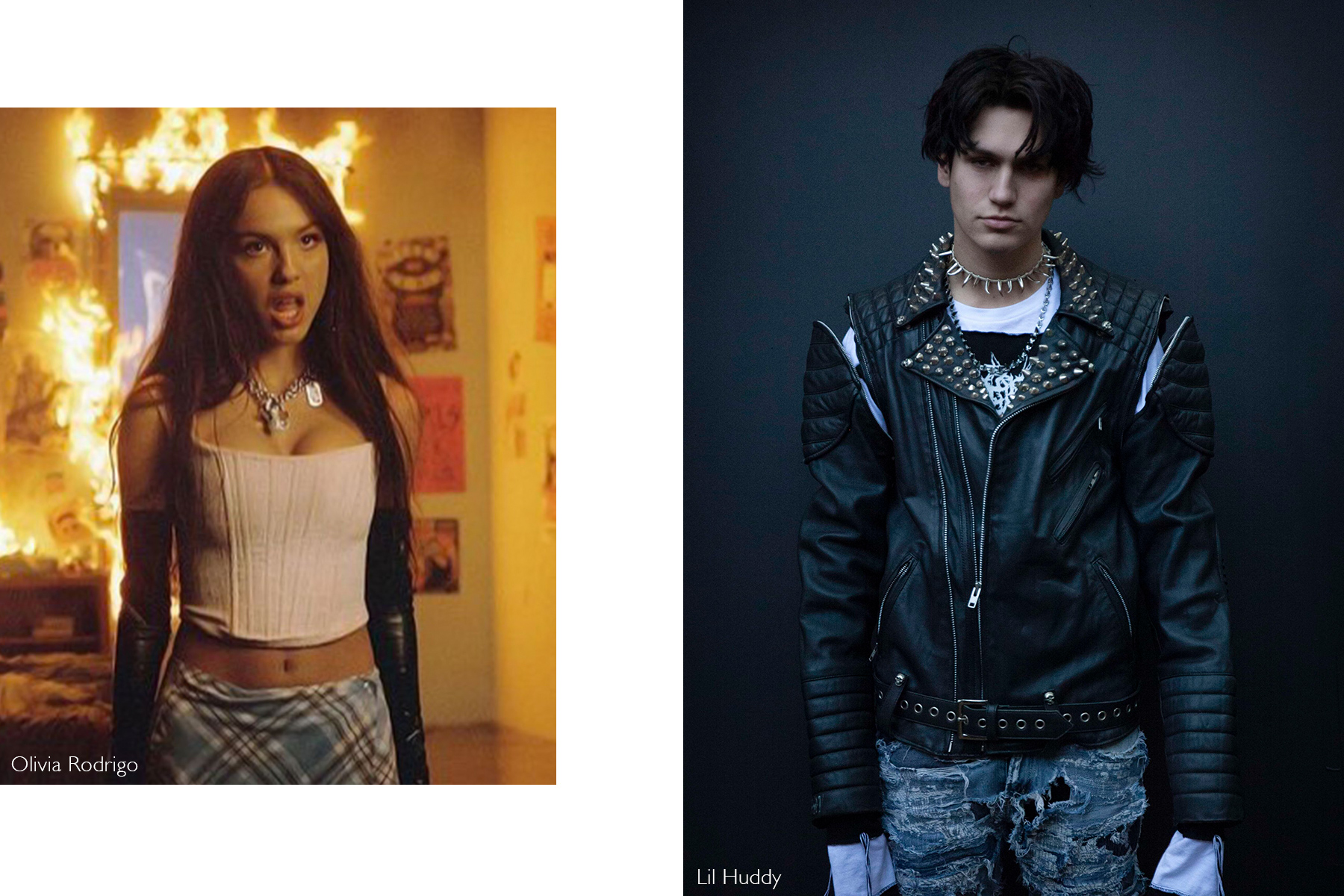 This sentiment is echoed in what Gen Z chooses to wear and share. From our social feeds to the runways in Paris, punk has taken hold of the fashion and beauty industries. Emo challenges and trends that use music from MySpace-era icons All Time Low, Simple Plan, and Paramore are going viral on TikTok, e-boy and alt fashion aesthetics are becoming favorites among tastemakers, and the edgy wolf cut is gaining viral popularity. As of this week, #poppunk has over 700M views on the popular video app. On Instagram, influencers are snapping pics with their middle fingers up and wearing gender-bending variations of tartan pants, mesh tights, and metal chokers. This attitude found its way onto the runway at Chanel’s Resort 2022 show, where models sported fishnets, inky liner, and lip piercing jewelry. Junya Watanabe’s FW21 collection channeled punk icon Soo Catwoman, while Molly Goddard’s tartan skirts, Simone Rocha’s leather jacket/combat boot combo, and Celine’s gothic Menswear collection all indicate an imminent punk fashion renaissance. Even Marc Jacobs is entering his emo era, posting back-to-back mirror selfies wearing grungy JNCO-esque wide-leg pants and platform heels. Proving to be in touch with internet culture and Gen Z’s ever-changing style, the designer recently launched Heaven, a division of his label that brings subcultures like punk and grunge to the masses. 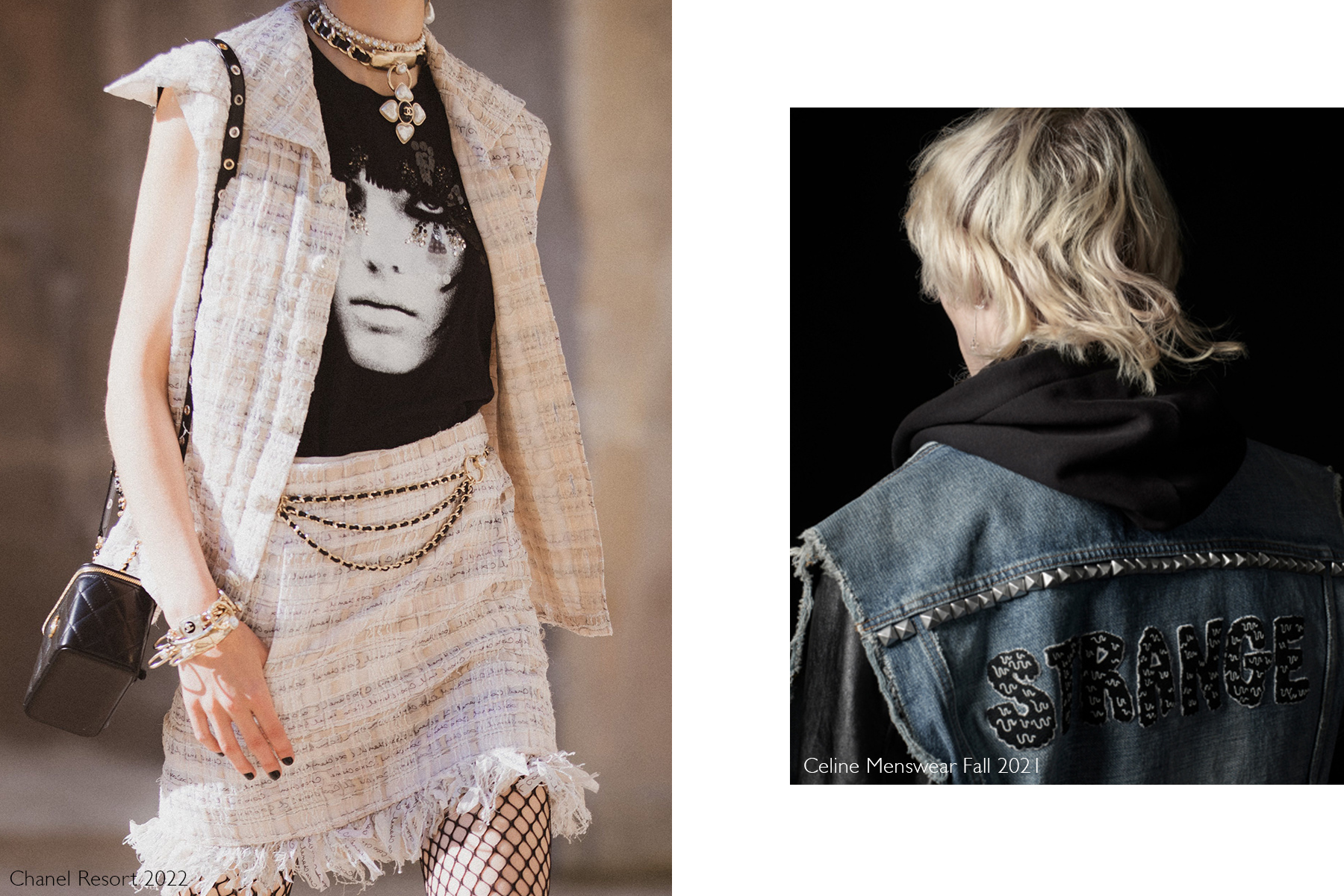 This, of course, is not the first time punk has permeated pop culture. In the mid-to-late 1990s, bands like Green Day, Blink-182, and The Offspring found mainstream success that continued into the early 2000s with artists like Avril Lavigne and Fall Out Boy. Designers like Vivienne Westwood developed an aesthetic characteristic of the musical style, blending different genres and popularizing rebellious expression. Now, the next generation is adapting the style to the internet age. Too young to remember or participate in its first iteration, Gen Z artists are finding ways to pay homage to the pop punk icons they grew up on–a collaboration between Willow Smith and Avril Lavigne is already in the works. As such, the punk revival could be seen as a natural progression of trends; a coming of age, if you will. “Trends come and go, but history does tend to repeat itself,” said Avril in a recent interview with i-D. This may be a case of a style simply making its way through the trend cycle, but even the pop punk queen recognizes that there is a deeper meaning to this sudden resurgence. “I think a lot of people have been having similar feelings of rebellion, but also people are more open and honest about their emotions and mental health, so I think the rawness in the emo music that we’re hearing today is really relatable for so many.” The pandemic has only amplified these feelings. Spending over a year stuck inside–many of us, back in our childhood bedrooms–has spurred feelings of helplessness, anger, and angst. With lockdowns now loosening, we are ready to rid ourselves of restrictions and move forward with a new lease on life. Beyond our collective emotional state, the punk style we’re gravitating towards is a reflection of our cultural climate and the state of the world we are re-entering.

A quick look at punk’s origins will reveal the underlying ideologies that shaped the rebellious subculture, namely individual liberty, anti-authoritarianism, anti-consumerism, and direct action. Now, our nation’s youth have more reasons than ever to share those ideologies. The coronavirus pandemic has shone a spotlight on pre-existing wealth, race, and gender inequalities, and robbed an entire generation of once-in-a-lifetime experiences. Graduating into the coronavirus recession, Gen Z is now the most unemployed generation according to the U.S. Bureau of Labor Statistics and is expected to be impacted financially and professionally in the same way that Millennials were impacted by the Great Recession. Even before the pandemic, Millennials and Gen Zers were aware of the sobering reality that they would likely be unable to afford a house or kids and be saddled with debt for the rest of their lives, all while bearing witness to the destruction of our planet by large corporations–according to The Carbon Majors Database, just 100 companies have been responsible for 71% of the global GHG emissions that cause global warming since 1998. At the same time, the wealthiest among us continue to get wealthier. During the pandemic, Jeff Bezos, the founder of Amazon, saw his wealth nearly double, and Elon Musk, the founder of Tesla, saw his increase by more than $160 billion.

It’s unsurprising then to see the working class rebel. Young people in China are “lying flat”–not getting married, not having children, not buying a house or a car, and refusing to work extra hours–in protest of consumerism and the country’s hyper-competitive work culture. In the United States, the restaurant industry is experiencing the repercussions of its abusive practices as workers choose to abandon the industry altogether. There are now 1.7 million fewer jobs filled than before the pandemic, despite posting almost a million job openings in March. Proving they are no longer willing to accept the status quo, Millennials and Gen Zers recognize that the current systems aren’t working and are willing to fight for change. The Morning Consult recently reported that trust in public institutions, such as the U.S. government, the police, the criminal justice system, and the news media, fell significantly between April and June 2020. At the forefront of movements like March For Our Lives, Black Lives Matter, and Fridays For Future, Gen Z is more radical in their attitudes and behaviors than the generations that came before. Not only are 71% willing to protest for the climate compared to 48% across all generations, but 52% are willing to get arrested for it, compared to 36% total, according to Wunderman Thompson. 73% are also willing to make dramatic changes to their lifestyle if it protects the planet, and 57% say they would forgo having children.

Economic failures and social injustices have defined the lives of our youngest generations and, in turn, the ways they express themselves. The punk aesthetic is returning at a time when trust in authority is low, people are questioning the values of consumerism, and direct action has become a common form of resistance. Now, with social media and the proliferation of information in the internet age, these ideas are spreading faster and farther than ever before. Conversations that were being held amongst a small subset of the population are now being viewed by millions of teenagers on TikTok, and niche styles, from e-boy to alt beauty, are getting their own hashtags. As Gen Z steps into positions of power, their affinity for punk culture has the potential to go beyond the Billboard Hot 100 and TikTok’s algorithm to create meaningful change.

Using our proprietary algorithm, we’ve identified themes and trends that are likely…